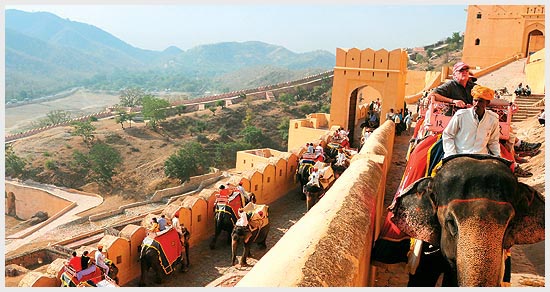 Soon after arrival at the Delhi airport/railway station, proceed towards Jaipur. This is the first destination of your Rajasthan trip that is recognised all over the world for its rich heritage. After reaching here, check-in at the designated hotel and repose for some time. Later, you can choose to stay back at the hotel or step out for exploring the beautiful city of Jaipur.

Jaipur, popularly known as the pink city, is the largest city and official capital of Rajasthan. The city was founded in the 18th century by Jai Singh II, who was the erstwhile ruler of Amber. Known for its enchanting temples, forts, palaces and gardens, Jaipur attracts thousands of travellers round the year. A leisure walk through the bustling and colourful streets of Jaipur is worth experiencing.

You can enjoy the entire day by visiting several sites and discovering the spectacular beauty of Jaipur. Later, go back to the hotel and sleep overnight.

As soon as you wake up, freshen up and come out of the hotel for a sightseeing trip of Jaipur.

You can start you sightseeing tour by visiting Hawa Mahal, which is a beautifully designed structure, commonly known as the palace of winds. Located in the heart of the city, this huge building is made up of red and pink sandstones. This palace is believed to an embodiment of the Rajputana architecture, and has intricately designed 953 windows.

Another site you must not miss during the excursion is the majestic City Palace, which is a major landmark and heritage site in Jaipur. Its most famous edifices are the Chandra Mahal and Mubarak Mahal. Next, move to see the collection of astronomical instruments at Jantar Mantar. It was built by Maharaja Jai Singh II, who was the ruler of Amber, and is presently listed as a World Heritage Site by UNESCO. It houses observatories, which consist of 14 major geometric devices to calculate time and astronomical changes.

Later, in the evening, go for a leisure walk and enjoy shopping at the vibrant bazaars of Jaipur. You cannot afford to miss buying the handmade footwear, dazzling jewellery and multicoloured leheriya sarees. The place is also known for footpath shopping, where you

can find vendors selling puppets, traditional clothes and colourful bangles. After a tiring day, you can head back to the hotel for overnight stay.

Today, leave Jaipur for continuing the journey towards Pushkar. On the way to the sacred city of Pushkar, you will get a chance to visit the divine city of Ajmer.

The bustling and revered city of Ajmer is the fifth largest in Rajasthan. Featuring landscape aspects like the picturesque Ana Sagar Lake and lofty Aravalli hills, the city is actually famous for maintaining its rich Islamic heritage. Ajmer is home to one of the most important Islamic pilgrimages of India – the Shrine of Khwaja Moinuddin Chishti. This place attracts innumerable Muslim and even Hindu devotees round the year. The beauty of Ajmer can be seen in the month of Ramazan, when the entire city is beautifully decorated.

Afterwards, move towards the religious and historic city of Pushkar, which is seeped in spirituality. It is said that Pushkar is one of the oldest existing places in the world. This holy land is home to several huge and revered temples. On reaching here, check-in at the hotel and take rest for some time.

The main attraction of Pushkar from where you can start your sightseeing trip is the enchanting Jagatpita Brahma Temple. This temple is dedicated to Lord Brahma – the creator god of Hindus. It is believed that out of the few temples of Lord Brahma existing in the world, this one is the most significant.

After witnessing the beauty of the Brahma temple, pay a visit to the enchanting Pushkar Lake. Surrounded by several bathing ghats, this lake is a famous and sacred water body. Hindus believe that a dip in this lake can wash away all your sins. Afterwards, go back to your hotel for overnight stay.

As soon as you wake up, check-out from the hotel, board the designated vehicle and proceed towards Delhi, where the trip started. On reaching here, depart towards the onward destination, i.e. home.

There are no reviews yet.

Be the first to review “Heritage Tour” Cancel reply

Jaipur, popularly known as the pink city, is the largest city and official capital of Rajasthan. The city was founded in the 18th century by Jai Singh II, who was the erstwhile ruler of Amber. Known for its enchanting temples, forts, palaces and gardens, Jaipur attracts thousands of travellers round the year. A leisure walk through the bustling and colourful streets of Jaipur is worth experiencing.